Tapping base bullion, impure lead and slag. Slag is flowing into the pot on the right and lead into moulds on the left. The inclined pipes convey the air blast to the furnace.

From The Chronicle (Adelaide), 25 September 1926 “The buildings at the works comprise the mixing plant (just renewed), the Dwight Lloyd section, the blast furnace section, the refinery, three bag houses, the zinc roasting and acid plant section, the Skinner roasting furnaces, the Barrier roasting furnaces section, the acid plant, the powerhouse, the assay and general offices, the company’s store, the dental clinic and first aid station, in addition to numerous other small buildings. The powerhouse supplies current for the works and for the whole of Port Pirie. Extensive alterations and additions are at the present time being effected at the acid plant. The principal handling machinery includes five flying foxes, four large cranes, a wheel for mechanical moulding and handling of bullion, and Newnham trucks.”

Blast Furnaces in the middle; refinery on the right; zinc plant on the left. Note ore trains on right and stack of refined lead on left. 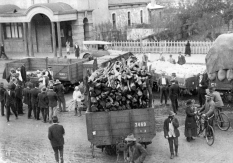 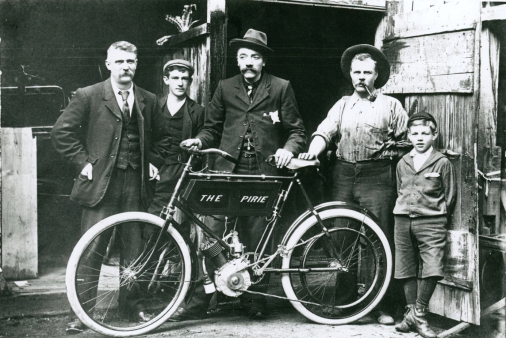 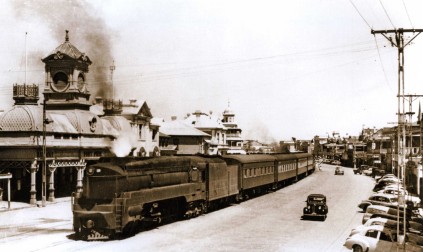 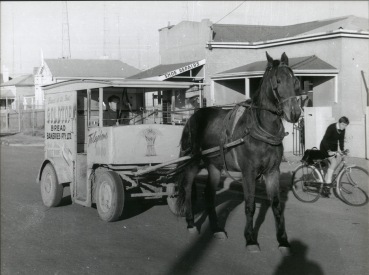 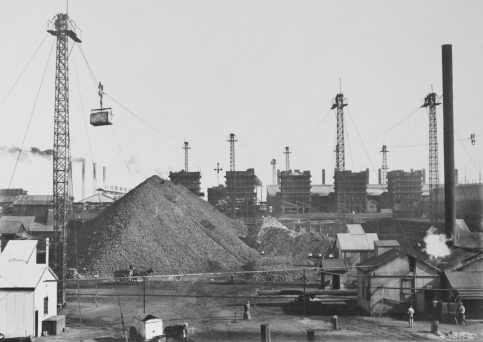 Showing bins and flying foxes for handling coke, roasted ore and fluxes. The pile on the left is coke. 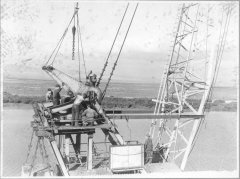 With the formation of the B.H.A.S., plans to expand the operations at Port Pirie were quickly underway. Large supplies of coal were needed to feed new furnaces, and more efficient methods of unloading and transporting coal were put in place.

On 25 January 1921 a catastrophic fire in the Dwight and Lloyd Roasting Plant brought the smelter to a standstill. The fire damage was estimated in excess of £100,000 and permanent replacement would take a minimum of 12 months. Amidst union activity and health concerns for workers, the plant was rebuilt and recommenced operations in August 1921. Source: Ken Bullock, Port Pirie: The Undaunted Years, p 94-96 From The Recorder (Port Pirie), 26 January 1921 “Yesterday was the seventh day on which the temperature reached at least 100 degrees in the shade. Everything was dry and susceptible to fire. Without much stretch of the imagination it could be said that wood work was cracking, almost crackling. It was hot to touch. So that it needed but a lick of fire to burst into flame. A strong, scorching wind made matters worse. Opinions vary as to the exact time at which the fire broke out. It was near to 3 o’clock in the afternoon. A gust of wind and perhaps some other coincidental event combined, and a tongue of flame leapt out of the burner, flicked a piece of woodwork near by, and the place was alight.”

The civic reception for General Pau was held at the newly constructed children’s playground. From The Chronicle (Adelaide), 23 November 1918 PATRIOTIC PORT PIRIE. GENERAL PAU’S PRAISE. Appreciation of the part Port Pirie had played in the war was voiced last week by General Pau when he mentioned how largely the action of the men employed at arduous labor in the lead smelters had contributed to the winning of the war. At the luncheon subsequently given in honor of the French visitors at the Olympia rooms by the directors of the Broken Hill Associated Smelters the chairman of directors (Hon. W. L. Baillieu M.L.C.) also paid tribute to the company’s employees here for the manner in which the output of munitions had been maintained. General Pau and other members of the Mission arrived by special train from Peterborough. They were accompanied by the Hons. J. G. Rice and W. H. Harvey. The distinguished visitors were met by the mayor (Mr A. B. Forgan), the general manager of Broken Hill Associated Smelters (Mr W. Robertson), and other officials of the company. The Excelsior Band played the National Anthem and the “Marseillaise”, and massed choirs under Mr G. H. Preston, rendered vocal numbers. A naval and military guard of honor were drawn up, and the town hall was decorated with flowers and flags. Shortly after 9 o’clock the party were conveyed by motor to the smelters, where a monster demonstration was made. General Pau addressed the employees, congratulating them upon the assistance they had rendered as munition workers and thanking the company for its cordial welcome. The scholars of the Solomontown and Pirie West schools, under their headmasters, Messrs G. Charlesworth and F. Fairweather, were drawn up in front of a large pavilion erected on the recently constructed children’s playground, where the civic reception took place. After the mayor had delivered an address of welcome, General Pau thanked those present for the homage addressed to his country. The result of the industry of the men of Port Pirie had contributed equally as much to defeating the enemy as the valor of their soldiers. (Cheers). At the request of General Pau, the Minister of Education, who was on the platform, granted the children a holiday for the following Monday. Subsequently General Pau and other members of the mission, the mayor, and councillors and officials of Broken Hill Associated Smelters were entertained at luncheon by the B.H.A.S. Company. General Pau, in proposing the smelting industry of Port Pirie, said although he was not a metallurgist himself, he came from a district that had special relations to metallurgy, but he had never seen an establishment so perfect in detail as the one they had visited that day. (Cheers). It reflected the greatest credit upon both the workers and the managerial staff, because he knew how largely the latter could influence the work as it went on. When he saw that large body of contented and happy men, he thought they and the company had solved the problems of workers and industry, which was one of the most serious confronting the world at present time. 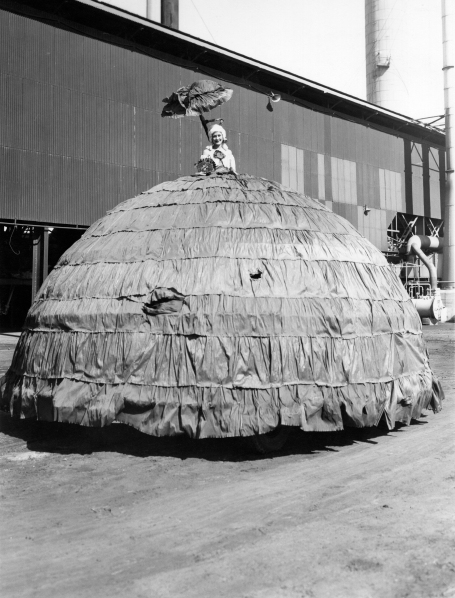 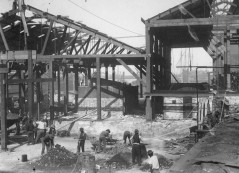 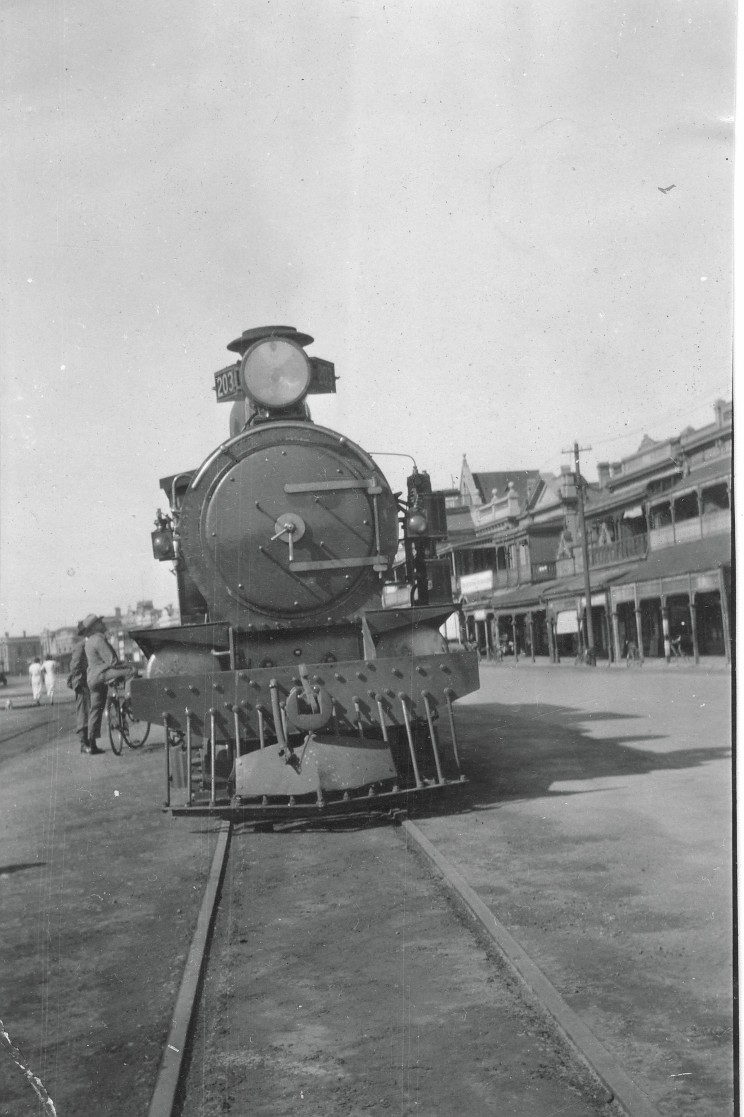